Thanks to the memory section on Facebook, an article written by Dr. Anthony Bradley popped up from two years that I shared titled The KKK, Selma, and Southern Christianity. It was a raw reflection from seeing the movie Selma but also being from the South, he knew all too well the realities that existed for black citizens especially having parents that lived through Jim Crow.

But he makes a specific point regarding the church;

As a theologian, this is where the movie became really interesting. Those who joined King were mainly Jewish, Protestant mainliners from the North, Roman Catholics, and Greek Orthodox. Conspicuously absent were conservative Protestant evangelicals, especially those from the South. In fact, Archbishop Iakovos of the Greek Orthodox Archdiocese of America was the highest ranking non-black religious figure in America to join King in the Selma march. This raised several questions for me: What was different about Greek Orthodox and Roman Catholic traditions that allowed them to freely join the fight for voting rights while evangelicals chose to do nothing or join the cause to support Jim Crow? Where were the Calvinists who believed in total depravity? Where were the evangelicals? Where was Billy Graham? Where were the Jonathan Edwards fans? Where were the Presbyterians, Southern Baptists, Methodists, and so on? I am asking because I do not understand.

What is it about southern evangelicalism that prevented those churches historically from seeing the plight of blacks as connected to the Gospel and the command to love God and neighbor? Maybe there is a real deep theological flaw in what is known as “evangelical theology?” Maybe the evangelicalism of the 1940s, 50s and 60s did not really understand the Gospel as clearly as many are lead to believe. I honestly do not have the answers to these questions but if evangelicals were so blinded by these issues during the Civil Rights Movement it makes me wonder what evangelicals might be missing today.

These are great questions, especially considering the fiercest defenders of segregation were evangelical Christians. A common retort that I’ve heard is that people weren’t really Christians. I think that’s a cop out. But perhaps the answers are probably more obvious and sobering than we might think. I believe the cultural forces that saw black citizens as inherently undeserving of equal rights and treatment were so permanently entrenched in the church, that Bible reading and believing folks accepted this premise without batting an eye. How else do you explain the cognitive dissonance? 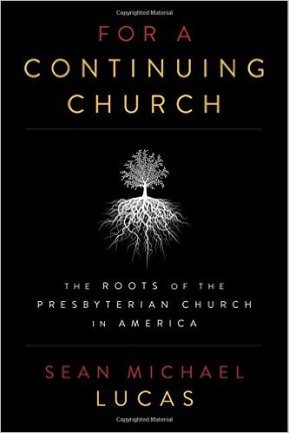 Nothing affirmed that belief for me more than this gem of a book, For a Continuing Church, written by Dr. Sean Lucus that I read last year. Dr. Lucas is a professor at Reformed Theological Seminary, a church historian, and a pastor in the Presbyterian Church of America (PCA). The book traces the decades of developments that led to the establishment of the PCA in 1973 from the departure of the larger Presbyterian body in the South (PCUS).

For decades the conservative contingency of the PCUS expressed growing concerns of the social progressive thought that was infiltrating the southern Presbyterian denomination.  Dr. Lucas provides an historically rich sketch of those who sought to combat this intrusion with efforts to preserve the foundation of Presbyterianism and it’s core doctrines in adherence to the inerrant of word of God and the biblically formed Westminster standards. Conservative leaders rightfully challenged the diminishing of core values of Presbyterianism against liberal doctrine, Communist sympathies, and what was perceived to be too much involvement in social concerns.

However, the social concerns told a different story. A prominent aspect that was incredibly hard to digest was the overarching attitudes towards African-Americans and the fight for equality. As the U.S. confronted the growing awareness of disparate treatment towards its black citizens, especially in the South at the dawn of the Civil Rights movement, the sentiment of conservative leaders within the denomination echoed the resistance to change expressed in the dominant Southern culture. Particularly after Brown v. Board of Education, conservative leaders viewed any kind of efforts of racial integration as a symptom of progressive thought that was infiltrating the church.  That purity of races should be maintained was the rallying cry of these conservative leaders so much so that these leaders adamantly opposed any efforts of racial integration and justice both in and out of the church.  To be sure, tensions were at a peak by the time the Civil Rights movement was in full swing. There were a number of statements reflecting this opposition that quite frankly made me cringe.

For a Continuing Church provides a glimpse of how easily blind spots can impede our ability to embrace a full expression of the church as it was meant to be. As I read through the book, I had no doubt that conservative leaders who sought to maintain the integrity of biblical faithfulness were sincere in their desire to fight against all the factors that they believed undermined it. But sadly, they could not see the harmful attitudes at work against those who shared their same humanity, and moreover for some, the same union in Christ. As Lucas points out, “This merger of doctrinal, political, racial, and economic conservatism represented the worldview of southern Presbyterian conservatives. In their minds, it was not possible to separate the strands.” Change of attitudes would be slow to change.

For me, its very fitting that the Civil Rights Movement grew out of the church, especially considering the biggest blind spots came from within the church. Sadly, there are still some today who believe that the church should not experience true integration.

Thankfully, my denomination has taken steps to publicly recognize the disparities and injustices that occurred by opposing equal rights and value of black brothers and sisters in Christ by passing Overture 43 at the 44th General Assembly built on the work Sean Lucas and Ligon Duncan, in consultation with African-American pastors in the denomination. Given the cognitive dissonance and harmful impact that existed for so long, this was a necessary step to the kind of reconciliation that King fought for.

21 thoughts on “The church in the age of MLK: the culture and us”