I recently got into a twitter exchange over the issue of church’s hosting of a racial reconciliation conference, panel discussion, etc. The thrust of the argument was that it puts a focus on the reconciliation according to skin and we should do as Paul says ‘to know no one after the flesh.’ I pushed back on the notion that anytime a church calls for a racial reconciliation, it is a “false gospel.” As typical with Twitter exchanges, I start getting lost in the comments. So I thought I’d sketch out some thoughts I’ve had on this issue in a more cohesive fashion. This is not so much about that exchange but rather  examining the broader scope of racial reconciliation efforts in the church, my observations of them, and also to identify some concerns. This is not meant to be anything exhaustive but more like me dumping some thoughts on this topic into a single space.

First let me note that I do heartily endorse the idea that believers should anchor their identities first and foremost in Christ. I believe that our first consideration for dealing with other believers is based on our union in Christ. When you see another person with whom you are united in Christ, the first thought should not be a [______] Christian but a fellow heir, regardless of their race, ethnicity, physical characteristics, or place of origin. We should take serious Gal. 3:28;

But of course there are distinctions and we can appreciate them according to how God made us.  Are we not male and female and are we not different in that regard? We are not nondescript blobs. We can appreciate the ways in which we bring our ethnicity, heritages and experiences to the table.  We also have to recognize when those distinctions have caused and do cause dissension in the body of Christ, especially when dealing with a long-standing one like racial disparities that were not only deeply ingrained in society for hundreds of years but also in our churches. Racial reconciliation is ultimately about reconciling hearts towards one another. END_OF_DOCUMENT_TOKEN_TO_BE_REPLACED

A couple of years ago, I penned a piece, Some Questions I’m Asking While Off to My White Evangelical Church, that got a bit of attention. The piece was the product of growing concerns I had regarding where the racial reconciliation was headed. I had questions of whether we were legitimately seeking reconciliation or was an agenda being imposed on the body of Christ that actually is driving a wedge through it.  And now that I’ve seen the movement morph into an anti-racist and social justice paradigm that adopts a worldview that seems to run contrary to a Christian paradigm in doctrine and practice, I stick by every word I wrote in asking the questions I had.

Speaking of which, there has been a lot of discussion on Critical Theory lately especially with the denouncement of whiteness in our churches. Neil Shenvi has done an excellent job in examining this theory and asking if integration is possible. Check out his website here and this hour talk. What I most appreciate about his work is that he doesn’t ignore the issues that Critical Theory is attempting to address given the very lengthy history that  the false of construct of race has produced. We can refute Critical Theory as the means to bring correction but we can’t refute the annuls of history whereby the white “superior” race dominated every aspect of culture that subjugated those of the so-called inferior race (namely those of African descent) to a sub-human classification. That white superiority complex also has denegrating views of Jews as well.

So we do have to be honest with history and particularly churches’ complicity in maintaining this false construct. However, one of my concerns is how we imposing the weight of history on to the present as if slavery and Jim Crow are very much enforced and we’ve made no progress at all. Surely, we can recognize changing attitudes that have weakened the hold of racism on institutional and cultural infrastructures.

But that doesn’t negate the fact that there are still issues, particularly with prevailing mindsets that uphold some kind of racial superior mindset and wants to preserve white heritage…against Blacks, Latinos, and even Jews. And yes, even in our churches. END_OF_DOCUMENT_TOKEN_TO_BE_REPLACED

The past few days, I’ve been observing the kerfuffle over the Sparrow Conference and the interview delivered by Ekemini Uwan. She spoke boldly about the need for white women to divest in whiteness by embracing their ethnic heritages and rejecting the power structure that whiteness created. She briefly explained that race was a false construct devised to create a classification of people and the result was whiteness that is rooted in plunder and theft. Unfortunately, the YouTube video was removed and her presence erased from the conference because some people couldn’t handle what she was saying. I personally believe that people weren’t hearing what she was saying and concluded that she was making racists statements against white people.

Moving past the conference and how issues related to race today are being addressed, I can see why some responded the way they did. We are bombarded by racialized sensitivities and the propensity to shut down any kind of pushback even when there are legitimate concerns about the way issues are being addressed. I notice this tendency to create hyperbole and conflation especially around current events, political ideology and public policy and wrap it around the danger of white supremacy.  I get that those classified as white people are persistently told they are the problem and they need to bow down in silence and repentance to every jot and tittle of demands or else they are complicit in the perpetuation of racism. Nobody wants an accusatory finger pointed at them at all times. Particularly with Christians, I can see how off-putting this can be. I observe that sometimes the focus on race can supersede our focus on Christ.

But we can’t deny the fact of how and why the false construct of the white and black race was created. It was constructed to create a hierarchal system whereby one class was deemed superior and one inferior. This hierarchal system emerged out of Europe based on economic trade that soon evolved into a full blown denial of personhood towards those of African descent. One only needs to look into the annuls of history to see how this resulted in power structures whereby one group of people, those classified as the white race, set the standard by which all else was subjected to including people deemed inferior solely because of the melanin and places of origin. END_OF_DOCUMENT_TOKEN_TO_BE_REPLACED 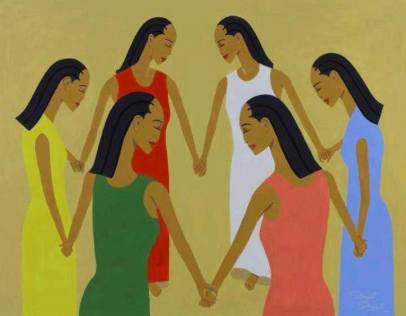 For the past week or so, I’ve watched the internet ablaze over a special gathering of women of color  sponsored by Legacy at the TGCW18 conference. (see their write up about it here.) The meeting is for women to come together to discuss their shared experiences (a phrase I will definitely be coming back to) and encourage one another. Why? Well, because being a minority, where minorities are very much the minority, trying to navigate through predominantly white spaces can be tricky and trying. If you don’t understand that, try talking to some minority women in those circumstances. But the upshot is that some women feel the need to retreat and gather among themselves apart from those who don’t really understand what it is like. They have a shared experience.

Of course, I get that there are varying degrees of sensitivity. Especially in these times of heightened racial awareness, I can see how those who are quick to racialize every aspect of every environment and interaction might feel the need for separate spaces. But let’s not be too quick to make those assumptions that explains what is going on here. And let’s not be too quick to attribute this acute awareness only among racial lines. Consider those who experience being a very small minority representation of whatever is the majority group: parents of small children in a church full of older couples; singles in the midst of married people; men in the company of a majority of women and vice versa. It’s not that you’re repudiating the majority group but there is a heightened sense of awareness that you kind of stand out and open to varying degrees of misunderstandings, misperceptions and prejudices.

This special gathering has spawned a bit of an uproar with charges of gospel-denying racism. I have even heard that the noise has caused the FBI to make some inquiries. Some folks are concerned that this kind of segregation has no place in the body of Christ. I do understand and appreciate the sentiment that oneness in Christ should preclude any kind of racial or ethnic superiority or exclusivity. As I wrote about in Some Questions I’m Asking While Off to my White Evangelical Church, I too have concerns that racial animus is creating a divide in the body of Christ. After all, Christ broke down the walls of ethnic hostility so that we can hold our identity in him first and foremost, bearing with one another and learning to love each other in spite of the extensive legacy of racial hostility. We do have to be cautious of creating unnecessary divides in the body of Christ, resisting the urge to retreat into separate enclaves because working out our salvation with fear and trembling is simply too intolerable. END_OF_DOCUMENT_TOKEN_TO_BE_REPLACED

A while back, I penned some thoughts about questions I had as it relates to issues of race and the church found here. I specifically directed my questions at those who feel like the cause of battling white supremacy takes such precedence that it becomes an overpowering force and actually defeats the purpose of reconciliation. I confess, I was a bit pointed and may even seemed to reject any lingering issues.

To be honest, I did not expect to be writing so much on this topic. I’ve been compelled to write because of concerns that I’ve had regarding the polarization of how issues of race were perceived in such disparate ways that increasingly, many in the church are decrying an urgency in addressing. I suspect that this is partially due to extended weariness and concern that things will never be right.

I want to wrap up some concluding thoughts as I don’t anticipate writing on this topic for awhile, as follows;

First know that I do not want to be dismissive of concerns, especially where legitimacy still exists. I am reminded on a regular basis that prejudices of all kinds still abound, not just on race.  Sometimes it is in your face, like the alt-right gathering at Charlottesville. But certainly more subtle and subversive can create standards around acceptably that is centered in Anglo culture. Yes, implicit bias does exist whereby a deviation from the standard is deemed to be inferior and even unacceptable according to that norm as this survey highlighted by a New York Times article points out. Surely, this can happen in churches to varying degrees whereby minority perspectives are disregarded and/or dismissed. I personally know of cases where this has happened.

So I do not want to undermine the very real frustrations that people of color can experience in predominantly white environments, especially in our churches. Though I am still left to ask about the collective conscious of “white evangelicalism” that pervades the church such that people of color are harmed. I continue to see the cries for white evangelicals to disrobe their “whiteness” so minority Christians can feel safe and welcome. But what exactly are the expectations in this regard? What exactly is the extent of harm? END_OF_DOCUMENT_TOKEN_TO_BE_REPLACED