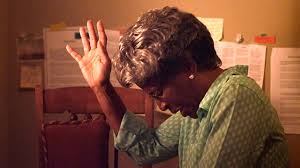 As a follow up to my last post, I wanted to bring the subject of The War Room closer to home. Again, in full disclosure I have not seen the film but I have heard a common thread in those that have seen, including the two reviews I posted in my last piece. Most notably, the takeaway from the film is that if you just pray hard enough God will do it.

Please allow me to get a little personal. Not that my story in no way can be a measuring stick but I think it can be instructive concerning this simplified formula in the context of God’s work in his creation. I also share this story because I know I’m not alone and I suspect this will resonate with a good number of Christians.

First know that I’m not sharing for this the sake of bashing a movie or releasing emotional diarrhea but the sake of examining how we consider prayer. For most of the 7 years I was in a troubled, unequally yoked marriage that was peppered with chronic illness and unkindness, I prayed. Oh how I prayed. I prayed that God would save my husband and soften his heart. I prayed that God would heal him and make our marriage whole. I turned my living room into a ‘war room’ and being more aligned with charismatic teaching at that time, would storm the gates, as I called it. The situation didn’t budge.

One day in 2004, I stopped dead in my tracks, or rather, I believe I was stopped dead in my tracks because the Lord gripped my heart. I was tired. I was disappointed. But most of all, I was intent on having things my way. My roar of anticipated triumph turned into a whisper of surrender – “not my will, but yours Lord.” I so desperately wanted him to give me that shiny object of a good marriage that I had prayed for. But alas, his will was something different. It was not long after that in that same year that my husband’s health rapidly declined and he passed away that August just shy of my son’s 7th birthday. END_OF_DOCUMENT_TOKEN_TO_BE_REPLACED