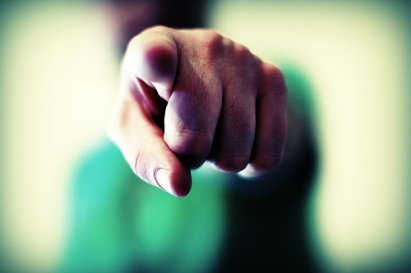 Well, it’s been a dozy of a week on social media. The allegations of sexual misconduct against Roy Moore continue to mount as does his adamant denial. Not only that, he has chalked it up as a grand political conspiracy, ‘it’s that other side.’ He will not back down. Now I can’t say for certainty these allegations are true though it is pretty hard to dismiss five separate stories. Given the seriousness of the charges, the thought of there being any truth to them gives me a chill regarding the lack of ownership. But I do recall another time a very prominent political figure was charged with inappropriate sexual behavior that initially met with the same response: “I did not have sex with that woman.” Of course we know how that story went. His adamant denials were dashed with the reality of truth. He was guilty.

This is just a small snippet of denial-defense-blame menagerie that not only has peppered the news. This happens everywhere. Incidents go down. Blame is assigned. Some will even take the opposite approach in blind support of the prominent particularly when driven by strong political or familial affiliations. Others will be quick to throw out unexamined charges of guilt especially against those on the “other side” wherever that is. Social media is rife with virtue signaling.

But here’s the thing. We might be sitting back in smug satisfaction that “these people” are morally corrupt, resting in their fame and power to hide their guilt all the while projecting innocence.  We may not be guilty of sexual misconduct, exploiting the vulnerable, or protecting prominent positions. But make no mistake, we are all capable of participating in the same kinds of charades we so easily denounce in other people. We can be guilty of wrong and project ourselves as right, hide our transgressions behind a veil of virtue, and point our fingers to the ones who can’t see all the while clouded by our own lenses. We’ll justify it because our sins are acceptable, masquerading as Christian concern–pride, self-righteousness, envy, and a lack of love. Sometimes the lies go so deep that we’ve even fooled ourselves in believing our own mess.

As Christians, we can forget that the root of the Fall runs deep into every fiber of creation, including our own souls. Yes, Christ bore the full weight of penalty for our sins and has made us new creations, but that does not exempt us from being touched by the reality of sin that lures us according to our own lust, as James so aptly says;

But each person is tempted when he is lured and enticed by his own desire. Then desire when it has conceived gives birth to sin, and sin when it is fully grown brings forth death. (James 1:14-5)

Funny thing is that our sinful desires can be disguised in a virtuous dress. We can so easily relive the events of Garden, selectively hearing God’s commands, twisting his word to suit our self-seeking purposes, and engaging in the worse kind of projection while thinking ourselves the best. “That woman you gave me” takes on multifarious purposes and words while we stick our chest out even though the conviction of truth makes us hide and wear metaphorical fig leaves. We deny. We accuse. We obfuscate.

When Jesus said “you shall know the truth and the truth will set you free” (John 8:32), he wasn’t merely talking about a set of propositions but his person as the eternal Son of God who is able to deliver us from the grip of the Fall’s deceiving tentacles. In context, he is talking about knowing him and obeying his word. It is only through this truth, the truth of aligning our minds and will with his that we are set free.

But that means we must own our stuff and get real honest when his word hits our hardened and self-justifying hearts. When the Holy Spirit’s conviction compels us to take ownership of our sinful propensities and make confessions of repentance and faith, it’s a call to step down off our accusatory platforms and point the finger at ourselves. It is no wonder that healing and confession are so tied together;

If we confess our sins he is faithful and just to forgive us our sins and to cleanse us from all unrighteousness. (1 John 1:9)

Therefore, confess your sins to one another and pray for one another, that you may be healed. (James 5:16)

The beautiful thing about confession is that Christ is there to catch them. He who sits at the Father’s right hand is ever interceding for us has provided his righteousness that gives us grace and help in time of need. (Heb. 4:16). So go ahead, own it and confess it. We may all be guilty of hiding behind our sin, but he has freed us condemnation (Rom 8:1).