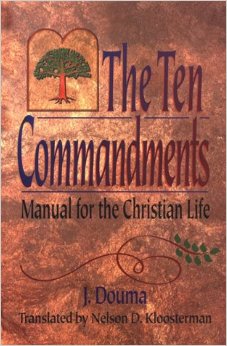 I’ve been reading through this excellent book that was recommended to me by a friend in a conversation in which I described my change of heart about the Ten Commandments. Yes, I confess, for many years I did not believe that the Ten Commandment applied to Christians since Jesus fulfilled the law. I shudder at that thought now since the Decalogue, aka the Ten Commandments,  represents God’s ethical requirements for his people. Surely God does not have a different standard in the OT than in the NT, but brought to their fullness in Christ.  Jesus demonstrated that this was summed up in the greatest command: to love the Lord with your heart, soul and mind and love neighbor as yourself.  More of that, and my conversion to see this light, in a separate post.

In The Ten Commandments: Manual for Christian Life, Jochem Douma, former professor of Christian ethics in the Netherlands, provides a very thoughtful commentary on how each commandment applies to Christian life.

I was really struck by this section on the first commandment, “You shall have no other gods beside Me.” (Exod. 20:3). Douma discusses the issue of idolarty and the freedom that Christ provides from it. But he takes it a step further to show the futility of idols.

“That leads us to this final observation. As you listen to the first commandment, you hear in it the liberation of which the prologue to the Ten Commandments bears witness. Yahweh demands the whole person, but in this total commitment of his person to the one true God, lies his greatest freedom. The one who serves Yahweh will live under His blessing, but the one who serves idols will languish in bondage.

Let us look first at ‘primitive’ idolatry. For the Egyptian, the Babylonian, and the Canaanite, danger lurked on every side. A tree, an animal, a rock, a river, the sea, a thunderstorm, lightning, a hostile neighbor, and more–dangerous divine powers nested everywhere and in everything. Catastrophes could ocur at any moment.  A wall of fear surrounded a person. Specific actions, prescribed incantations, and particular  rituals were needed to neutralize the host of dangers. Magic, exorcism, and sacrifices were therefore the way to pacify the angry gods.

Place over against this the confession of God as the only Creator of heaven and earth, who alone is to be worshiped and feared. Then a rock is just a rock, a tree merely a tree, a person is only a person, and even an angel is nothing more than a servant before whom no man needs to bow (Rev. 22:8-9). For the whole world, including everything that might arouse fear, is subject to Him who wants to be our Father in Christ Jesus. And with that confession, every bondage that enslaves a person to something creaturely–no matter what it is—has been broken.”

See the contrast? Often we assign significance to that which is made as if it has power then coming up with formulas to assuage the fear as if the power is in the thing made. But understanding who has the power should cast out fear. Sadly, I’ve seen Christians live in this kind of fear and in some circles, come up with all kinds of extra-biblical rituals to alleviate that fear. Douma goes on to say,

“If divine power lives in a tree, it would be hazardous to cut it down. If mother earth is a goddess, the mining industry would never have been developed. Had lightening been seen as something divine, the lightening rod would never have been invented. But these and many other possibilities all lay open before us when the world and everything in it no longer arouses fear, but became just the ordinary world that God created for us to use.

We may debate the theory of Christian origin of technology. But one thing is sure; the human race and the world are able to reach their full potential only when we deal with things as they are, that is, created good by God and not to be refused, as long as long as we use them with thanksgiving to God (1 Tim. 4:4). It must have sounded quite liberating to the Corinthians to hear from Paul that even food sacrificed to idols and sold in the markets of Corinth could be purchased and eaten, because the earth and everything in it belongs to the Lord (1 Cor. 10:25-27). Love for God casts out fear and enables genuine human development.”

And that’s the freedom delusion. When we live in fear of what has been made out of anxiety that somehow evil lurks in it, we are not really free. But Douma highlights something else that is worthy noting regarding genuine human development. As those made in the image of God and stewards of message of reconcilation through Christ, human flourishing goes hand in hand. It’s not an either/or. We actually circumvent that stewardship when we adopt an “Don’t taste, don’t touch” attitude.

Yes, Christians are not to be not of the world. As Paul indicates in Romans 12:2, “Do not be conformed to this world, but be transformed by the renewing of your mind.” But we do need to make a distinction between opposing the world’s unChristian and anti-Christian philosophies and utilizing creation redemptively. Just because people use a product of creation (including what humans make) for evil does not make the thing evil, only its use.

No greater example is found in the Roman cross, a mere piece of wood used by a wicked government to carry out the most excruciating condemnation of criminals. But God used it for his greatest good to demonstrate his love for the world he created through his Son who bore all the condemnation because of the penalty of sin.

2 thoughts on “The Freedom Delusion”