Whenever I run across statements from pastors that I think run contrary to the witness of Scripture, it just makes me cringe. I do so because of their responsibility to their congregation and the orienting effects of what is being promoted.  And so it was with a statement I came across the other day;

Hebrew 5:12 speaks to those who should have matured by now but are still sitting in the pew waiting to be spoon-fed. When someone says I’m leaving my church because I not being fed it may speak volumes about their lack of maturity. Only babies need to be fed, mature believers know how to feed themselves and others.

Now I don’t want to pick on one person.  But I want to leverage this comment and express a concern that is relevant on a broader scale. Because I’ve heard this statement before, that mature believers shouldn’t expect sermons to feed them. I get that pastors are challenged with people who don’t want to read their Bibles and grow. I get it and empathize. But the idea that we should not expect to be fed is so grievously unfaithful to the witness of Scripture, the task of discipleship and the purpose of preaching,

First, to say we feed ourselves runs contrary to Ephesians 4:11-16

And he gave the apostles, the prophets, the evangelists, the shepherds and teachers, to equip the saints for the work of ministry, for building up the body of Christ, until we all attain to the unity of the faith and of the knowledge of the Son of God, to mature manhood,to the measure of the stature of the fullness of Christ, so that we may no longer be children, tossed to and fro by the waves and carried about by every wind of doctrine, by human cunning, by craftiness in deceitful schemes. Rather, speaking the truth in love, we are togrow up in every way into him who is the head, into Christ, from whom the whole body, joined and held together by every joint with which it is equipped, when each part is working properly, makes the body grow so that it builds itself up in love. 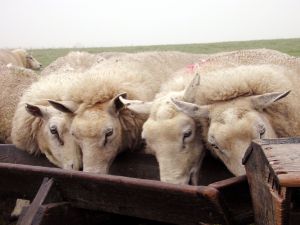 We always need the food of the gospel and Christ-centered preaching. Always! I can’t imagine that when Jesus told Peter to feed his sheep that he stipulated a caveat “until they can feed themselves”. The idea that feed ourselves runs contrary to what it means to be in the body of Christ. Maturity doesn’t happen because we feed ourselves but because we grow together in the Lord and learn how to apply godly wisdom. No matter how much even a pastor is accomplishing for the Lord, feeding of God’s truths from others is always needed. That is how we grow together in the Lord.

But I think the problem also might lie in the preaching itself and whether its actually orienting the believer to trust in the sufficient work of Christ. Because an alternative form of preaching is in abundance in today’s evangelical culture that promotes the believer to work harder to prove their Christian faithfulness.  The only thing that kind of preaching will breed is a quest to try harder or shame at failure. As I noted in this piece here, there is a difference between preaching theologically and preaching to-do tasks that the preacher thinks the congregation should be accomplishing. In Pilgrim Theology: Core Doctrines for Christian Disciples, Michael Horton adequately addresses this;

In evangelical theologies, this sacramental aspect of God’s Word is often marginalized by a purely pedagogical (instructional) concept. It is therefore not surprising that when the Word is reduced to its didactic function there arises a longing of the people to encounter God here and now through other means. However, by affirming its sacramental as well as the regulative (canonical) character, we can recognize the Word of God’s working and ruling, saving and teaching.”

Dr Horton speaks from a Reformed perspective but I think this statement is true to what preaching is supposed to be. Preaching is not a lecture and far more than biblical instruction but is a means of grace whereby we grow. It also requires teaching from a canonical perspective to orient believers to the work and character of the triune God and what that means for the church. By canonical is meant Christ-centered, whereby the gospel is represented in what passage is being taught and correlated with the overall redemptive narrative. If preaching is nothing more than didactic instruction on how to do x, y and z better,  it is not theological preaching, nor is the sermon that will fuel growth, only steps to comply with.

Maturing people need gospel oriented, Christ-centered food. It is wrong to think at some point in our Christian walk, we stop needing this. I actually believe that the maturing believer will be able to discern when they are not being fed adequately because of inadequate, a-theological preaching. If the sermons are nothing but the topic du jour with cherry picked verses to support that agenda, that’s not feeding people. If the sermons are more about what the pastor wants to see happen than about what God did, this will leave people thirsty. This kind of preaching lacks the nutrition that we need and would be like the mom who gives here kids chips and soda for dinner. Our growth requires more of Christ, not less.  Maturity will actually increase discernment when preaching is not faithful to the task that it is to accomplish, which is to mature the believer in Christ by pointing to him.

So let’s be careful in distinguishing between the baby who does not want to grow and the maturing believer who wants good food.