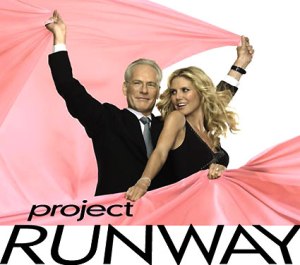 I don’t care for many reality shows but I confess to being a Project Runway fan and it’s a diversion from my the crime drama genre I like so much.  If you are not familiar with the show, 16 aspiring designers are given challenges each week to show their proficiency and creativity as a designer.  The ultimate goal is to win the prize of $100,000 to start their own line, a spread in a popular magazine and the notoriety that goes with it  Now in it’s 10th season, there is something about the combination of watching the creative process and the human dynamic unfold with each episode. Most of the designers come with some pretty well established experience. Some have worked with well known designers. And all of them think they are the next best thing out there.

The human dynamic that emerges on the show is fascinating. Some are consistently good and their work speaks for itself.  They may toot their own horn and even sound obnoxious in the process. But when their work product stands to their words, it is validated.  For the most, however, there exists a fair amount of delusion among many of the contestants who take aim at other designers and their supposedly inferior work.

Tim Gunn serves as mentor and fashion guru who lends a critical eye to designer’s products while they are in progress. Sometimes he has to tell that overly confident designer that there is something not working right with their design. He gives them some suggestions on how they can rethink the design to something that is more likely to wow the judges. For the most part, I have found myself in agreement with his input. The camera does not lie. If something doesn’t look right, it doesn’t look right no matter how much the designer engages in self-exaltation.

Some of the designers listen to him. They step back and engage in a critical self-assessment of their work. Sometimes, they might ask other designers for feedback on Gunn’s assessment. But then there are others who are so consumed with their own importance, their own adulation of their products and commitment to their design aesthetic, they refuse to listen to Gunn’s critical input or anyone else’s input. It’s really telling when the designer meets the same criticism of the judges and cannot understand why the judges are being so critical. Some have refuted the judges verbally and basically tells them “I disagree”. I find it really interesting when I go on the Project Runway facebook page only to hear a community chiming in and basically in agreement. Everyone can see it except for that delusional designer.

Delusions. It happens to all of us. Don’t think for a minute that just because where talking about some people on a reality show that it is far removed from us or more importantly that if we are in Christ we are above this level of delusion. Because the reality is they…are…us. Yep, inflated sense of contributions, consumed with our own perspective, disengaged from the reality of who we really are, unaware of varying degrees of justifying and self-protective behavior. We have an incredible capacity to lie to ourselves.

This is why I have increasingly come to the realization that we need input from the faith community, whether it be our local assembly, school, fellowship groups or any other venue in which Christians gather together on a regular basis. Because we have blind spots and an incredible propensity to believe our own stuff. We need people in our lives that can tell us the truth. But more importantly, we need to have the humility to listen to them.

When I started seminary, more than one person said to me that their initial impression of me was that I was mean, unfriendly and unapproachable. Of course, by the time they were able to tell me this they saw a different side and felt comfortable enough to tell me. I would laugh it off or just simply dismiss it. I would think, I don’t know why they are saying that because they are wrong.

If you’ve followed my writings in the past few years, especially recently, you know that the last few years have been very challenging on a deeply personal level and very eye opening. So many discoveries have been made. I was quite delusional. So even now when people tell me how different I seem compared to my early seminary days, I take that as evidence at the fruit of all the challenges.

But here’s the thing, how can all these people be saying the same thing about how I came across and all be wrong? It’s might be questionable if one person says it…or maybe two. If if multiple people are consistently saying the same thing? No, they weren’t wrong, I was just blind. Blind to my own demeanor, unable to see clearly that what they saw was a reality. In hindsight, I can see that they were right. They were right because the mask of coping mechanisms that served as my guard, though I was not able to see it then.

One of the most humbling classes I’ve had in seminary is my first preaching class. Each sermon, you are evaluated by the other 11 sermons on an evaluation form, plus the professor’s feedback and class discussion plus his comments on the voice track on the DVD that you have to watch. Ouch! If multiple people made the same comment, how on earth could I refute that? But I’ve learned from Project Runway, that it is possible. I don’t doubt there there are some who would stick by there justifications even in the midst of contrary observations.

The Lord has graciously brought into my life some surprisingly and honest people – honest about their stuff and honest with me. They’ve confronted who they are, where they’ve been and how it’s affected them and they own it. They’ve allowed others to speak the truth about what they see and don’t reject them. It has shown me the importance of brutal honesty, starting with ourselves and the need to remove our justifying and self-protective guards. They have encouraged me to embrace honesty at all costs. It’s tough stuff because often the toughest people we’ll ever have to confront is ourselves.