Recently, I was in a business meeting in which I represented the organization I work for in a collaborative project with other organizations. The collaborative involved a grant application and therefore was contingent upon receiving those funds to be implemented. While we were putting the application together, at times others involved would assert positive declarations about receiving the funds under the premise that this would happen if we just declare it…in Jesus name.

These folks were acting on a strain of teaching that has infiltrated evangelicalism, that is positive declarations are needed to make circumstances happen. In Positively Powerless, Laura Martin, DTS grad, addresses the foundation and fallacy of this teaching as it contradicts the premise of Christianity. She sketches the historical development, which is built on the Positive Thinking movement that considers the mind a force in which we can “will” events in our favor. She notes this is not found in Scripture but rather has its foundation in Eastern Mysticism (I would have loved to see this built out a little more).

She then provides a snapshot of what Scripture does provide regarding the reality of sin and how that has impacted us. More importantly, Christianity is not built on positive declarations but rather submission to the lordship of Christ. In Jesus’ upside down kingdom paradigm, “success” from a kingdom perspective will sometimes result in our lives not looking successful or at least as the world sees it. We will see complete reversal of the Fall’s effect in the new heavens and new earth, but not entirely now. I love that she brings up Joni Erickson Tada because she is a prime example of what successful Christianity looks like from a Christian perspective, which does not jive with the proclaimers of positive thinking.

The chapter entitled A Christian View of Self is particularly noteworthy.  Fueled by the the prominence of self-esteem that took root in Christian teaching in the 20th century, positive thinking places an emphasis on the power of self to create reality in contrast to the emphasis on Christ. She concludes, “When the church came under the power of this movement it had the significant consequence of distracting us from Christ, shifting our priorities, and creating a different gospel entirely.” Indeed, this movement has created a great distraction and emphasizing the wrong things! END_OF_DOCUMENT_TOKEN_TO_BE_REPLACED

I spent 6 years at DTS to get my ThM (Masters of Theology). In those 6 years I heard numerous chapel messages since chapel was a requirement (6 years is a long time!). Truth be told, in my maturing years, I have trouble recalling a lot. But one message made a profound impact on me delivered by Nathan Holsteen, a professor in the Theological Studies department. Now I took many classes with Dr. Holsteen and he was also one of my thesis readers. But what really resonated with me is this chapel message he delivered in 2013 entitled Beware of Mud.

And this love, that we walk according to his commandments; this is the commandment, just as you have heard from the beginning, so that you should walk in it. For many deceivers have gone out into the world, those who do not confess the coming of the Christ in the flesh. Such a one is the deceiver and the antichrist. Watch yourselves, so that you may not lose what we worked for, but may win a full reward. Everyone who goes on ahead and does not abide in the teaching of Christ, does not have God. Whoever abides in the teaching has both the Father and the Son. If anyone comes to you and does not bring this teaching, do not receive him into your house or give him any greeting, for whoever greets him takes part in his wicked works.

He laid out the problem, that certain teachers from among the flock were going about teaching something that contrary to the Christian message. And let’s be clear; they weren’t just some obvious outsiders disparaging Christianity but those who came from within the church, who “proclaimed” the name of Christ but used his name in a dishonorable fashion. END_OF_DOCUMENT_TOKEN_TO_BE_REPLACED 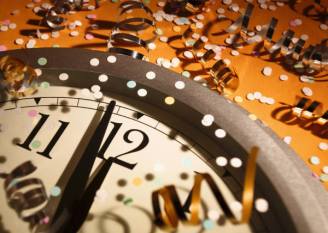 I don’t want to be one of those kinds of Christians, hyper-critical and disrupting cherished beliefs simply because I see problems with it. I recognize that some of our practices, rightly or wrongly, can become so ingrained because of teaching that has influenced us, that animosity will possibly result from anyone who tries to knock it out of our hands.

But there’s something I do want to address, that runs rampant in some Christian circles, some more than others. I’m not addressing this merely because I believe it’s inconsistent with the whole counsel of Scripture, which it is or because I disagree, but because of the implications that it can have especially for those young in the faith.

It is simply this: declaring what God is going to do in the new year. This typically comes in the language of “breakthrough” – answers to prayers, financial gain, better circumstances, overcoming sinful patterns or bad habits – basically a change because you declare it to be so. Often this is prompted by the proclamations of church leaders under the guise of prophecy, that this is “your year.” My friend Ekemini said it best in her excellent piece at Reformed Margins;

[T]his is the time of year that our social media timelines, news feeds, and even television commercials teem with declarations from false prophets who boldly prognosticate about the impending new year.

They “decree and declare”—through memes no less—that 2016 is your year! Deceptively they tell their followers to simply “Claim riches, health, and prosperity! Bind death, destruction, and poverty. Do this and 2016 will be yours!” Never mind that they said the same about 2015, 2014, and so on. God is doing a “new thing” in 2016!

But it’s something else to impose upon God’s agenda what he will do in your life. I hate to bust bubbles, but we really don’t know what’s going to happen in the way of breakthroughs. People can declare and decree that 2016 will be their year, that won’t change God’s sovereign hand. Yes, pray for change, pray for open doors, pray for those trials and circumstances. But also pray that you might know Christ better, that you might know the power of his resurrection, and that you might serve his body more faithfully. END_OF_DOCUMENT_TOKEN_TO_BE_REPLACED

In my last post, I opened up my discussion on how we read the book of Revelation with a personal anecdote of how we bring presuppositions into reading the Bible. The specific example I used was a belief that I had for many years, which is that God gave Christians the ability speak things into existence and are required to do so. You can read here on how that unraveled for me just by reading one verse in its proper context. Romans 4:17 – calling things that be not as though they were.

So why did I believe for so many years that this passage supported the notion of speaking things into existence even though I had read this book many times? I’ll tell you why. It is because this concept has been so pervasive in a strain of evangelicalism that it gets read into the biblical text. It is because the concept has been so popularized and regurgitated that it has become like a major doctrine in some parts.

If you believe that God has given his creatures this ability, that our words somehow contain power to create conditions in circumstances and that God only moves according to this power, please keep reading. I want to challenge you on the biblical narrative itself. END_OF_DOCUMENT_TOKEN_TO_BE_REPLACED

I am often confronted with the strange ways the Bible is interpreted. I don’t mean the deviations in various interpretations, such as baptism, spiritual gifts or eschatology, but interpretations that subject the meaning of the Bible to standards that are disconnected from it’s nature and purpose.

I came across this hilarious video from the new Family Feud game that is hosted by Steve Harvey. Take a listen;

Funny and yet sobering, reminding me of ways in which some treat the Bible as if we can make it be whatever response we want AND get excited about it! I find so often that this brother’s “Texas” can be our approach to the Bible. By that I mean, employing methods that have nothing to do with the Christ-centered theme of Scripture. I’m talking about reading definitions into the text or extracting meaning out of the text that is not even related to what the author is trying to communicate or even connected to God’s redemptive narrative of what he is accomplishing through the Son.

Over at The Gospel Coalition, David Schrock has provided both a fine example of how we can disconnect passages from their intended meaning. In Jabez and the Soft Prosperity Gospel, Schrock indicates that the primary reason for interpretations that result in a sub-Christian or anti-Christian paradigm results from making personal applications of Scripture and not considering how passages relate to the overall theme of Scripture. END_OF_DOCUMENT_TOKEN_TO_BE_REPLACED